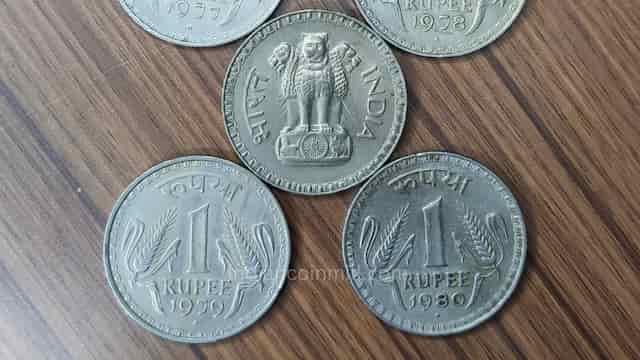 These Old 1 Rupee coins are not easily found in the market.
Most people who have these types of coins in their homes, they keep them for their collection and never use them for buying goods. So, are these types of rare? let’s find out.

These new coins (1975-1982) were minted with copper and nickel metal, but previously one rupee coins were minted with nickel only. Now, these coins are 8 grams in weight, whereas the coins minted in 1962 and 1972 was 10 grams. These coins have the same design as the previous coins where you can see corn strives on the reverse side of the coin and 1 rupee written. Minting year and mint mark on the bottom side. These coin was minted in Kolkata and Bombay mint. The Bombay mint’s mint mark is diamond shape and the Kolkata mint coin has no mint mark below the year. The Edge of these coins are commonly security edge.

The price of these coins is not very high. Many peoples think that old coins have a very high value in the market in today’s time. But every coin is not considered as rare for their oldness. The only coins considered as collectible and rare, which have very low minting. These one rupee coins are collectible in UNC condition but the value of these coins is not very high. In unc condition you can get around 15 to 30 rupees Max. in fine to extra fine condition, the market value will be around 5 to 10 rupees. A year wise set from 1975 to 1982 can cost around 100 to 300 Rs as per the condition of the coins. But coins can be rare also because of any error, Edge verity, Etc.