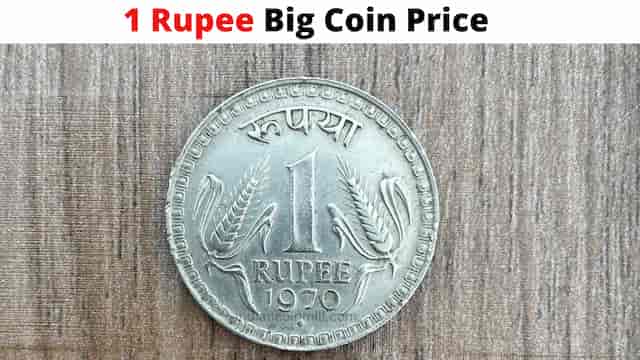 After independence 1 Rupee coin was released in 1950 for the first time but these coins were the part of Anna system, where one rupee was equal to 16 Anna. Just after that in 1957, India replaced the anna system with the decimal system.
Since 1962 we got many types of rs 1 coins in common circulation. And many of them are quite expensive.
Rs 1 Big coins released in 1962 and 1970 are rare and collectible coins. These one-rupee coins are quite huge in size as compared to today’s coins. The diameter of this coin is 28 mm. Also, these coins are minted in Calcutta and Bombay mints and the metal used in these coins is nickel. Many of you may have these coins in your collection. If you want to know the value of these coins in the current time make sure to read this article carefully.

1 Rupee coins releasing 1962 to 1970 were quite heavy in weight and big in size the diameter of these coins was 28mm. The weight of these 1 Rupee coins is 10 grams. The metal used in 1 rupee coin was nickel only. These coins were minted in Bombay and Calcutta.
Obverse side: this coin has Ashoka lion capital on the obverse side. Bharat and India are written side by side.
Reverse side: 1 Rupee रुपया written on the coin.